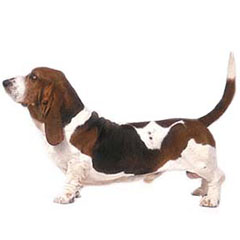 The Basset Hound's line began in northern France, most notably Normandy. Derived from a number of scent hounds, they resemble ancient stag hounds of that region in every way except for their dwarfed legs. The first written mention of these Basset-type hounds was in 1585 by Jacques du Fouilloux in his book about hunting and hunting dogs. The word "basset" comes from the French wordbas,which means low-set. In France there are six recognized French Basset breeds. They are Basset Artesien Normand, Basset Bleu de Gascogne, Basset Fauve de Bretagne, Basset Griffon Vendeen, Petite (registerable in the United States) Basset Griffon Vendeen, Grandand of course our own Basset Hound.

Do not expect a highly energetic dog running through your house. Indoors, the Basset is somewhat lethargic and very laid-back, unless you open the refrigerator door or a gang of kids comes over to play. They are gentle dogs with a sweet disposition that enjoy eating and sleeping. However, they do come alive once taken outdoors, where their magnificent scenting abilities are activated. They are second only to the Bloodhound when it comes to tracking down a prey animal or just about anything they are hunting, including humans. Like all scent hounds, they keep their noses close to the ground, making it easier to sniff around. Although their default behavior is placid, they become different dogs once their hunting instincts are roused. On a scent, a Basset Hound can become stubborn, willful, and vocal with a deep, soulful bay that lovers of this breed enjoy so much. When on the hunt, you always know where these dogs are. Basset Hounds get along well with other animals, are capable of hunting in a pack, and are friendly with strangers. They are very social and gregarious, and enjoy participating in family activities.

Basset Hounds appear to be massive dogs, although they are not as heavy as they look. They have long bodies, thick bones, and short legs. Their physical characteristics, including their coats, which are hard, smooth and short, enable them to be proficient hunters, running through rough terrain consisting of thick bramble and brush with ease. Their heads are quite large but in good proportion to their long bodies. They have large, slightly sunken eyes that appear to be soft and sad. Their ears are extremely long, low-set and quite wide. Their skin is loose and elastic and provides protection from most forms of weather. The breed's coat are seen in all allowable hound colors including black and tan, liver and tan, and red; darker colors being interspersed with lighter or badger-colored hair, and sometimes flecked with white.

As with many hunting breeds, housebreaking can be difficult to accomplish unless started the minute you bring the dog into the house. The use of rewards is most effective with this breed; avoid punishments or harsh corrections. Bassets will respond well to consistent and determined training. When training, be careful with their long, floppy ears, which can be easily pinched with a leash and collar. Problem behaviors can be chewing, overeating, digging and howling. You can overcome these issues with early obedience training.

Their short, hard coats are smooth and require a quick brushing once a day to control shedding. No clipping or trimming is required. Because their low-to-the-ground stomachs pick up dirt easily, their long ears require constant cleaning, and because their skin is oily (causing odor), an occasional bath or trip to the groomer is desirable.

Pokey, the hound friend of TV's Lassie; and who could forget Flash, the sidekick of Roscoe P. Coltrane of Hazzard County?

© Copyright 2014 LifeLearn Inc. Used and/or modified with permission under license.

We look forward to meeting you!

We are happy to book an appointment for you! Simply complete our easy online pet portal form, or call our clinic and we will be happy to assist you.